Living Room Composition 2012, originally uploaded by debchrisjoseph.
Posted by Debbie Buchanan Engle at 8:51 AM No comments:

#3 in an experimental series of 7

Posted by Debbie Buchanan Engle at 8:49 AM No comments:

Oh, I should like to ride the seas,
A roaring buccaneer;
A cutlass banging at my knees,
A dirk behind my ear.
And when my captives' chains would clank
I'd howl with glee and drink,
And then fling out the quivering plank
And watch the beggars sink.

I'd like to straddle gory decks,
And dig in laden sands,
And know the feel of throbbing necks
Between my knotted hands.
Oh, I should like to strut and curse
Among my blackguard crew....
But I am writing little verse,
As little ladies do.

Oh, I should like to dance and laugh
And pose and preen and sway,
And rip the hearts of men in half,
And toss the bits away.
I'd like to view the reeling years
Through unastonished eyes,
And dip my finger-tips in tears,
And give my smiles for sighs.

I'd stroll beyond the ancient bounds,
And tap at fastened gates,
And hear the prettiest of sound-
The clink of shattered fates.
My slaves I'd like to bind with thongs
That cut and burn and chill....
But I am writing little songs,
As little ladies will.

Posted by Debbie Hollis at 1:57 PM No comments:

They decided they would launch a campaign to recall Jindal and House Speaker Chuck Kleckley. None had ever been politically active before.

You have to understand that Bobby Jindal–at this moment in time–owns Louisiana politics, lock, stock, and barrel. The teachers’ campaign was akin to a petition drive against the emperor of Rome.

Their campaign didn’t get very far. They didn’t have an organization or money, and they didn’t collect enough signatures to get on the ballot.

“The petitions required signatures from at least one-third of the registered voters in an election district. In the case of Jindal, it would have been about 965,000 signatures statewide. For Kleckley, it was roughly 9,000 signatures.

In each case the required reports were filed 56 days late. When they were filed, the reports reflected little financial activity.

The Jindal recall campaign showed $525 in receipts and no disbursement.

The Kleckley effort showed $1,600 in receipts and no disbursements.”

The Republican party spent $100,000 to quash the recall effort, and it filed a complaint with the state Ethics Board because the teachers did not file their campaign disclosure documents in the required 45 day period; they were 11 days late.

I had planned to ask readers of this blog to raise the money to pay their fines, but an anonymous donor in Louisiana has already stepped up and done it.

The teachers were acting on their own, as citizens in a democracy. I would have gladly shown my support for them.

This is the same Ethics Board that ruled a few weeks ago that it was no conflict of interest for a member of the State Board of Education to award a contract to a business that had given him or her a campaign contribution.

Source:  http://dianeravitch.net/2012/12/24/four-courageous-teachers-in-louisiana/
Posted by Debbie Hollis at 9:45 AM No comments:

Yesterday a friend and I were censored by the fine folks at Facebook.

Several weeks ago, I was involved in an online debate with local Tea Party Congressman and Onion enthusiast, Rep. Dr. John Fleming (R-LA).  The conversation began on our local newspaper website, and was connected to Facebook via the online sign-in mechanism.

After a prolonged and heated conversation with Rep. Fleming, we constituents came to the painful realization that Rep. Fleming was (1) blatantly bullying us in a public forum, (2) refusing to answer basic public policy questions, and (3) resorting to canned Tea Party talking points when responding to our sincere concerns.

Yesterday, several weeks after the online conversation ended, Facebook informed me that:

"We removed content you posted.  We removed the following content you posted or were the admin of because it violates Facebook's Statement of Rights and Responsibilities:  'Fleming is no servant leader. He should read Robert Greenleaf and get a clue.'"

After analyzing this incident, I have come to the following conclusions:

2.  Facebook is a privately-owned corporation with its own set of ethics and standards.

3.  Freedom of speech laws apply to us as individual citizens (allegedly).  However, as contract-signing users of a privately-owned product, we are obligated to abide by the owner's rules & regulations.

4.  Tea Party Republicans, including Rep. John Fleming, have not disappeared - they've just become more subversive and pissed off since the Presidential election.

5.  A narcissistic, ineffective Tea Party Congressman unable to converse intelligently with his own constituents re: public policy in an open forum is VERY likely to stoop to dictating his paranoid demands to the corporation that hosts that forum, rather than educating himself and thoughtfully considering the demands of the voters.

6.  If that corporation is spineless - and we all know it is - then said corporation will likely bend to his will to avoid losing profits gained thru tax loopholes, political favors, and potential government-imposed sanctions or shut-down.

7.  Syria. Egypt.  Other governments have forcefully shut down public access to the internet in order to control the people & suppress their voices.  Do we really believe that extremist Tea Party politicians here in the U.S. wouldn't LOVE to keep intelligent folks from sharing intelligent ideas via the internet?  Censorship is how they begin that process.

8.  Facebook refuses to delete anti-Muslim hate speech on Tea Party-related pages.  I reported several online statements made by members of the Red River Tea Party and the "We The People - Shreveport" Facebook page; however, Facebook replied that these venomous remarks "didn't meet their standards" for removal.  Any reasonable person could see that the remarks are without doubt hate speech, but that doesn't matter to Facebook admins.  But my mention of servant leadership, Robert Greenleaf and Fleming in the same sentence DOES merit censorship based on Facebook's unpublished rules.

8.  I don't have to volunteer to be oppressed.  It's my decision whether to keep subscribing to a privately-owned service that will arbitrarily censor me.  Now, I have to make a decision based on what I know.

We all have to make a decision.
Posted by Debbie Hollis at 12:01 PM No comments:


Gov. Jindal called for Republicans to rethink their approach to the so-called "fiscal cliff" negotiations and instead fight for structural reforms, such as instituting a federal balanced budget amendment, requiring a super majority to raise taxes or creating term limits.
While he didn't suggest that Republicans should drop their opposition to tax increases on the wealthy, he argued that the party's focus should be elsewhere.
Jindal wrote in an op-ed published in Politico, "[I]n the negotiations, Republicans certainly should fight to at least get something done that will matter. At present, any reading of the headlines over the past week indicates that Republicans are fighting to protect the rich and cut benefits for seniors. It may be possible to have worse political positioning than that, but I’m not sure how."
Pot Meet Kettle…
Clearly the reinvention of Governor Bobby Jindal and his national political rhetoric has skewed his reality.
Back in the Real World of Louisiana:
Louisiana has not had a balanced budget in the five years of the Jindal Administration.  Every year, the budget is patched together with one-time money and massive mid-year budget cuts.  In fact, a group of Republican legislators have revolted against the Governor over his poor fiscal management.
Louisiana continues to eviscerate higher education, social services, health care and public education, but finds the money to give away massive tax breaks to out of state corporations.
Big Business Tax Breaks
As Jindal continues to tout his ever changing personality as the kinder and gentler Republican, Louisiana Budget Project estimates that, "Louisiana spends at least $1.79 billion a year on corporate subsidies and incentive programs at the state and local level, which comes to $394 for every man, woman and child in the state.”
LBP’s analysis of Louisiana’s tax exemptions found that the cost of “tax incentives and exemption contracts administered by the Department of Economic Development climbed from $59 million in 2001 to nearly $400 million a decade later—a 573% increase.”
The state capital outlay budget is always over subscribed to available funding and managing debt is a principal function of the state budget.
Dismantling Services to Children, Seniors and Disadvantaged
There is always enough money for big out of state businesses, but no money for the people--funding for schools has been frozen, public hospital are shuttered and the average working family still struggles to make ends meet.
Meanwhile, the schools are crumbling, the universities are withering, the public hospitals are being sold at bargain prices.
Louisiana would rather make out of state national health care and insurance conglomerates rich, rather than focusing on providing adequate access to health care to Louisiana citizens.
The impact of political rhetoric and positioning on the national stage….
What is the Impact of National Political Positioning?
Governor Jindal considers himself a possible 2016 presidential contender and has embarked on a campaign to rebrand himself and his party since the election. Last month, Jindal told Politico, “We’ve got to make sure that we are not the party of big business, big banks, big Wall Street bailouts, big corporate loopholes, big anything. We cannot be, we must not be, the party that simply protects the rich so they get to keep their toys.”
It is clear that the political rhetoric from Governor Jindal gives on the national level does not match the actions here in Louisiana. If being Governor of Louisiana is the job he wants, as he always says, then maybe he should fix the mess in Louisiana.
Out of state, out of touch and out of ideas…
Posted by Debbie Hollis at 8:07 AM No comments:

Photos from the annual holiday art exhibit & sale in the Highland Cultural District.

Posted by Debbie Buchanan Engle at 9:50 PM No comments:

Art for Sale at First Presbyterian Church in Shreveport, LA 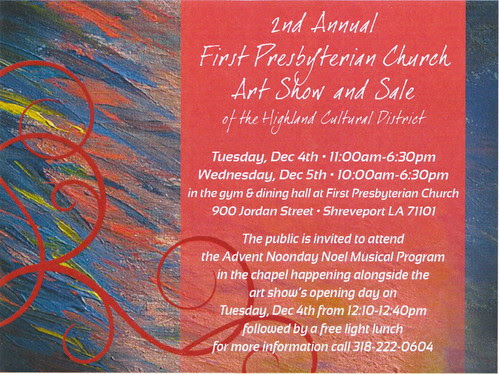 Art for sale at First Pres, originally uploaded by trudeau.