debchrisjoseph's photostream on Flickr.
Posted by Debbie Buchanan Engle at 10:33 PM No comments:

The following is a press release from our friends at the Louisiana Department of Revenue. Highlighted comments are my own.


BATON ROUGE - With news outlets continuing to report on the Governor’s goal of eliminating personal and corporate income taxes, some comparisons have been made between the sales tax and the income tax, and what it means for individuals and the state.
As you continue to report on this issue, we wanted to provide you with some facts and figures to keep in mind:

1. Sales tax is a MORE STABLE form of revenue compared to the personal income tax. According to the Louisiana Revenue Estimating Conference (REC) and the Louisiana Department of Revenue (LDR), sales tax collections have historically been MORE STABLE than personal income tax collections. (REC Historical Data; LDR Annual Reports). Additionally, according to R. Alison Felix, who authored "The Growth and Volatility of State Tax Revenue Sources in the Tenth District," state sales taxes have proven to be a more stable source of revenue for year-to-year budgetary expenditures."  Of course it is - 21% of our state's population is living at the poverty level & is exempt from filing due to Bobby Jindal's extreme austerity measures & failed economic development efforts. The poor still have to eat, though!

2. Over a 30-year period, the nonpartisan Tax Foundation used 26 different economic studies to determine sales taxes were MORE BENEFICIAL for economic growth than both personal and corporate income tax. (Tax Foundation Special Report No. 207 December 18, 2012)  Brief online research reveals the following: "The Tax Foundation is organized as 501(c)3 non-profit educational and research organization. Its website states that journalists should describe it as: "a nonpartisan tax research group", though it has been described as having a "pro-business leaning" and it has ties to various conservative groups." - Source: http://en.wikipedia.org/wiki/Tax_Foundation

3. Eliminating personal income tax will create a business climate that encourages MORE BUSINESS INVESTMENT and MORE JOBS. According to the nonpartisan Tax Policy Center, America’s economy would steadily grow by “0.6 percent larger than otherwise after two years; 1.8 percent larger after ten years; and 3.6 percent larger in the very long run” if the nation switched to a tax system that relied on sales tax, not income tax. (Tax Policy Center) Please, Mr. Jindal, tell us more about your success as an economic developer - and no fibbing on the unlivable wage rates of most jobs in Louisiana.

4. Sales tax grows with the economy. When compared to other sources of revenue, sales tax is relatively stable during economic downturns resulting in more revenue as the need arises. Read: financially rape the poor regardless of national economic recession, high unemployment rates, inability to afford basic needs like healthcare, etc. because they still have to buy food and the state needs revenue.

5. Governor Jindal's proposal will KEEP the Constitutional protections for the exemptions of food for home consumption, prescription medicine, and residential utilities. These exemptions result in the average individual or family with income under $30,000 per year having almost half of their annual purchases exempt from state sales tax. These progressive provisions lessen the impact of the sales tax on lower income individuals and families. I totally take BJ at his word on this. He's been so honest & ethical thus far, after all. He's a good Boy Scout who would never pass any laws that would adversely affect the poor.

6. In order to offset unfair impacts to low income groups, Governor Jindal's proposal will set aside funding to operate an Earned Income Tax Credit or a similar mechanism. Nice & vague. See commentary on #5.

Posted by Debbie Hollis at 9:46 AM No comments:

On January 16, the Board of Elementary and Secondary Education will vote on allowing school districts to choose poorly and continue the push to privatize public education in Louisiana.


BESE will consider another in a series of radical assaults on our schools and the teaching profession. It's time to say NO!

Proposed changes to Bulletin 741, the Louisiana Handbook for School Administrators, will:


Superintendent John White’s proposed changes are so far-reaching and numerous that BESE members voted to delay action on the proposal last November. Now members are under heavy pressure by the Jindal administration to approve changes that will harm students, minimize teachers and diminish accountability in our schools.
The changes are touted as ways to enhance flexibility by local school districts. The truth is that they serve to mask the damage done by the continued underfunding of our schools. 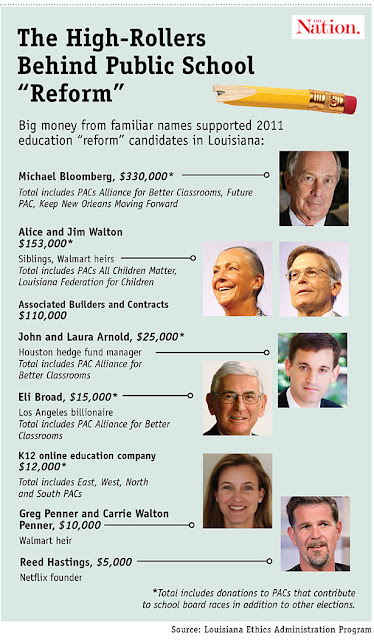 Here are just a few of the few of the changes to be considered next Tuesday: 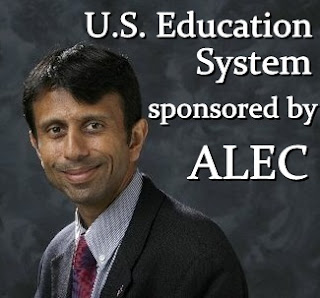 Other changes in the 87-page bulletin are far too numerous to list. To see the full extent of the overhaul, please click here and scroll through page after page of extreme revisions to the document.

It’s time to urge BESE members to think more deeply about such dramatic changes in the name of "flexibility."


Contact members of the BESE board by clicking here: http://hq-afl.salsalabs.com/o/4013/c/380/p/dia/action3/common/public/index.sjs?action_KEY=5275

Posted by Debbie Hollis at 11:24 AM No comments: 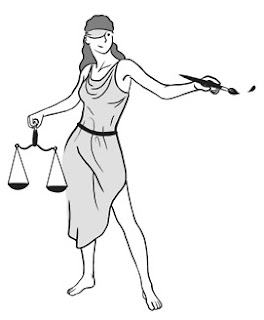 Louisiana NOW has joined with a coalition of organizations, called Legislative Agenda for Women (LAW), which was created to work with state legislators, local political party representatives, and various legislative caucus chairs to push for specific legislation to improve or protect the interests of women in Louisiana. The founding coalition members are NOW, National Council of Jewish Women, Planned Parenthood, American Civil Liberties Union, American Association of University Women, and the League of Women Voters. LAW has developed an agenda for the upcoming 2013 Legislative Session which will convene in April. Three pieces of legislation have been prioritized by LAW.

The first piece is a resolution or statute to direct the Governor to reconsider his rejection of the Medicaid Expansion element of the Affordable Care Act which would expand the availability of Medicaid to families with incomes above the poverty level. As NOW noted in an earlier press release, because poverty and lack of access to healthcare disproportionately impacts women, especially African-American and Latina women, the decision to cut off expanded Medicaid access to the citizens of Louisiana not only affects women's healthcare, but costs women job opportunities in the healthcare field.

The second piece of legislation is the Pay Equity Bill to address the wage disparities between men and women in public employment. This legislation was introduced in the 2012 Session by Senator Karen Carter-Peterson (D-New Orleans), but was watered down to a study of pay equity issues. The bill requiring the study passed the legislature overwhelmingly, but was vetoed by the Governor.

The third piece of legislation is a bill to address certain aspects of the current sex education law, including the authorization for the Department of Education to survey students regarding risk behaviors.

Sen. Peterson and Representative Helena Moreno (D-New Orleans) have both agreed to work with LAW in the effort to enact these three pieces of legislation. LAW is currently seeking sponsors for these legislative efforts who would have the best chance of leading the bills to successful passage. NOW is encouraging members statewide to talk to their own legislators about these issues that affect women and girls, to encourage their legislators to join in supporting the efforts of the Legislative Agenda for Women, and ultimately to actively lobby their legislators for support and passage of the bills that are supported by the Legislative Agenda for Women coalition.

It is hoped that the focus on these pieces of legislation will highlight issues, for legislators as well as for the electorate,that impact women disproportionately and will encourage the Louisiana Legislature to specifically consider the needs of women when enacting any legislation in the future.

Posted by Debbie Hollis at 10:03 AM No comments:

"BTW... YOU LOOK GREAT!!" Acts of tenderness. This is what we need today, everyday. This is in the women's bathroom at Bear's. Sending love and light into the world any way we can... #softlove #bearsfairfield #shreveport #louisiana 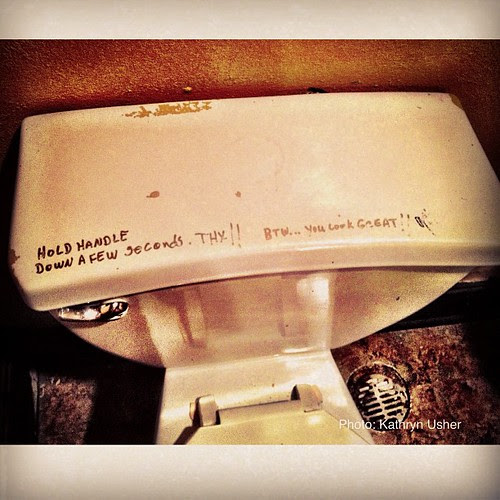 "BTW... YOU LOOK GREAT!!" Acts of tenderness. This is what we need today, everyday. This is in the women's bathroom at Bear's. Sending love and light into the world any way we can... #softlove #bearsfairfield #shreveport #louisiana, originally uploaded by Kathryn Usher.

Posted by Debbie Buchanan Engle at 10:50 AM No comments:

Posted by Debbie Buchanan Engle at 8:12 PM No comments:

Posted by Debbie Buchanan Engle at 8:11 PM No comments:

Posted by Debbie Buchanan Engle at 8:09 PM No comments:

Posted by Debbie Buchanan Engle at 8:08 PM No comments:

Posted by Debbie Buchanan Engle at 12:09 PM No comments: