You are invited to my photography exhibit at the East Bank Gallery. 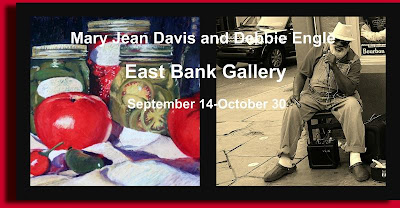 The Bossier Arts Council presents the art of Debbie Engle in the East Bank Gallery,
and Mary Jean Davis in the Emerging Artist Gallery.


"My most recent body of work is relatively documentary in nature.  These images reflect a personal affinity for the eccentricities and unusual nature of my home state.  Images in this collection span Louisiana from the White Lightening Road in the northeast, to the French Quarter in New Orleans, to the small town of Lecompte in Central Louisiana, to the historic Highland Neighborhood in Shreveport.  Tourists come from around the world to experience Louisiana culture; I hope I have represented it well in this collection."
Posted by Debbie Hollis at 7:39 PM 3 comments:

Works by Thirty-four North Louisiana Artists on View at the Meadows Museum of Art at Centenary College of LouisianaSeptember 8 through December 15, 2013*

Thirty-four North Louisiana artists who work in a variety of media are represented in The Carolyn Querbes Nelson Third Meadows Museum North Louisiana Artists’ Triennial Competition, that opens to the general public on Sunday, September 8, and kicks off the 2013 season at the Meadows Museum of Art at Centenary College of Louisiana.

A special artists’ reception hosted by the Friends of the Algur Meadows Museum will be held on Saturday, September 7, 2013, from 5:30 to 7:00 PM in the museum galleries. The exhibition will open to the public on Sunday, September 8, at 1:00 PM.

The Triennial Competition is specifically designed to provide visibility for artists working in North Louisiana as well as opportunities to meet and talk with arts professionals outside of the region. Preparations for the 2013 Triennial Competition got underway this summer when more than 50 artists responded to the Call for Entries. On August 1, exhibition juror Jolene Flood began the process of selecting works. “There are clearly many good artists at work in Louisiana,” Flood said after viewing the Triennial Competition artists’ submissions. She added, “It was a pleasure to view the works.” As owner and director of the Flood Gallery in Asheville, North Carolina, Flood manages a tight schedule, but has agreed to visit Shreveport later in the fall to meet artists and address the community.

Asheville’s cutting-edge Flood Gallery is located in the Phil Mechanic Studios building and showcases an ambitious exhibition schedule featuring local artists as well as national and international artists, seventeen artists’ studios, a library that contains more than 1,000 volumes, and internet capability for artists in residence. Additionally, the Flood Gallery and Fine Art Center houses Blue Ridge Biofuels, the only Bio-fuel production facility in the region.

As part of programming, a number of participating artists have agreed to present gallery talks about their work and scheduling is underway. Students from the region will also have an opportunity to view the works when they tour the galleries on school fieldtrips. Tours may be scheduled by calling Marvkevea Campbell between the hours of 1:00 – 4:00 PM, Monday, through Friday, at 318.869.5169.

For further information about this exhibition or scheduled events at the Meadows Museum of Art, call 318.869.5169.

Calendar of Events
Saturday, September 7, 2013Friends of the Algur Meadows Museum exhibition reception for artists5:30 – 7:00 PM in the museum galleriesLibations and hors d’oeuvresRSVP 318-869-5040RSVP REQUIRED FOR THE OPENING RECEPTION

Posted by Debbie Hollis at 5:51 PM No comments: