States and local governments that enter into tax-abatement agreements with businesses and others will soon be required to disclose more information to the public, as the result of new nationwide accounting rules that go into effect in 2017.

Under the new rules, state and local governments must report all economic development incentives as foregone tax revenue beginning with their fiscal year 2017 annual financial reports. Specifically, governments will have to disclose the gross dollar amount of corporate tax breaks for economic development and similar activities, any commitments agreed upon, and how the government will get the money back (clawback) if the goals are not achieved, among other things.

The amount of foregone tax revenues for tax deals with businesses and others is significant, with estimates for 2012 exceeding $80 billion.

The new rules from the Government Accounting Standards Board are designed to encourage transparency while “provid[ing] citizens and taxpayers, legislative and oversight bodies, municipal bond analysts, and others with information they need to evaluate the financial health of governments, make decisions, and assess accountability.”

Business tax abatements usually reduce tax revenues to local governments, which often turn to nonprofits to make up the some of the difference by demanding taxes, fees, or payments in lieu of taxes.

The new government disclosure rules should enable nonprofits to demonstrate their value to communities in comparison to economic deals struck by local policymakers.

Source:  National Council of Nonprofits
Posted by Debbie Hollis at 7:55 PM No comments: Links to this post

How to Use Creativity in Organizing: A free webinar for artistic activism 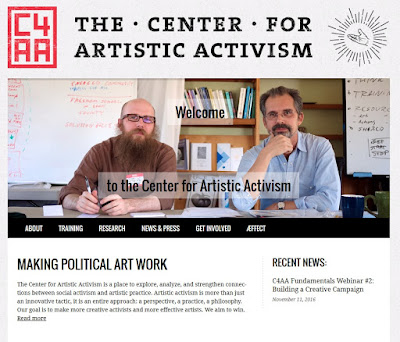 How can we use art to intervene in the political process?
How can we use art to challenge power?
Use creativity to create a long-term strategy.
Watch online here: http://attendee.gotowebinar.com/register/7997422448019653379
Hosted by the Center For Artistic Activism.
Posted by Debbie Hollis at 4:21 PM No comments: Links to this post

Posted by Debbie Hollis at 5:25 PM No comments: Links to this post

Posted by Debbie Hollis at 5:07 PM No comments: Links to this post

Sen. Troy Carter has proposed SB 461 this session.  This bill, if it becomes law, will change EVERYTHING that caused my son's father to abuse us via the court system for 16 years, and eventually steal him away from me for three years.

The bill eliminates a well-hidden aspect of the overt corruption in our family courts: the ability of wealthy, well-connected people to pick and choose custody "evaluators" and "mental health professionals" who will do whatever is required to secure custody for the parent who had them hired by the judge.

The bill is currently in committee.  You can email the committee members and encourage them to approve the bill.  After they approve it, they will forward it to the legislature for a full vote.  If approved by the full House and Senate, the bill will then go to the governor's desk to be signed into law.

PLEASE contact your state legislators and tell them to vote FOR this bill.

First, thank you for your service to our state. This has been an especially difficult year for Louisiana, and I appreciate your tenacity and willingness to go the extra mile for your constituents.

Second, I would like to encourage you to support Sen. Troy Carter's SB 461.

As the mother of a son who endured 16 years of family court abuse in Louisiana, I am hopeful that this legislation will eventually reverse the widespread corruption and overt graft in our state's district courts.  This bill represents the only glimmer of hope for systemic improvement and progress in an otherwise notoriously corrupt family court system.

My son's father is an attorney here in Shreveport, and I cannot begin to tell you how harshly he abused my son, me, and the system by using his unfettered access to personal friends who are also court officials.  You are welcome to read a sample of our horrific court transcripts here: http://debbiehollis.blogspot.com/2009/08/top-20-craziest-things-on-record-during.html

Over the years, countless parents across the region have contacted me about their similar painful experiences with custody/divorce trials, and several of us have started a support group for people who have lost children via the courts and their faulty use of unqualified, prejudiced mediators and court-appointed "experts." NOTE: Parents in our group were never reported to or investigated by the Department of Children & Family Services.  Our experiences are all the result of intentional abuse by and through the court system via a circle of attorneys/mediators/judges who have a well-documented history of working together to manipulate the 1st Judicial District court to their financial and personal advantage. In addition, each parent in our group was found 100% fit to rear our children upon being evaluated by independent licensed psychological professionals, despite the findings of court-appointed mediators and judges during the course of our trials.

This type of abuse is rampant and unchecked here in the 1st Judicial District; there is no evidence that other districts in our state operate any differently.

This bill, as I understand it, eliminates a portion of the overt corruption in our family courts: the ability of wealthy, well-connected people to pick and choose custody evaluators and mental health "professionals" who will do whatever is required to secure custody for the parent who (literally) had them hired by the judge.

It also forbids ex parte communication between the court and the mediators, as well as eliminating many other prejudicial practices I have personally witnessed in the courtroom while fighting to rightfully maintain custody of my own son for 16 years.I encourage you to approve this bill as it is written, and send it for a full vote of the legislature.Children and parents experiencing painful family separation deserve this legal protection from Louisiana's corrupt, one-sided family court system.

I trust that you will do what is best for our state's children and families.

Many thanks,
Debbie Hollis
(Address, Phone)