Hydraulic fracturing, aka "fracking," is a new method of extracting gas and oil from rocks at a depth of 2,000 to 10,000 feet down into the shale (soft, sedimentary rock formed from consolidated mud or clay) where one finds natural gas.

First, deep wells are drilled straight down through the aquifer (the mixture of soil and water from which life-sustaining water is extracted). This drilling then curves horizontally below the earth's surface and into its shale rock formations. Next, millions of gallons of water laced with chemicals are injected at enormous pressure into these rock formations, breaking apart the rock and freeing trapped methane along with other dangerous materials.

Why Is Fracking Dangerous? 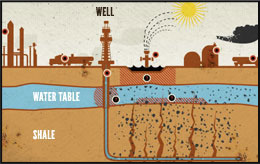 Has Fracking Been Banned Anywhere?

Yes, in Vermont. Governor Peter Shumlin and legislature made Vermont the first U.S. state to ban Fracking.  New Jersey, which lacks the pockets of natural gas that one finds in Pennsylvania, Texas, and New York has banned the treatment of Fracking wastewater.  It has also been banned in France, Bulgaria, and South Africa.

How Can They Do This?  Isn't This Against The Safe Drinking Water Act?

The Safe Drinking Water Act (SDWA) is the principal federal law in the United States intended to ensure safe drinking water for the public. In 2005, the Bush/Cheney Energy Bill exempted natural gas drilling from the SDWA. It also exempts companies from disclosing the chemicals used during hydraulic fracturing.

For more information and to take further action:

Email ThisBlogThis!Share to TwitterShare to FacebookShare to Pinterest
Labels: against, artists, Fracking