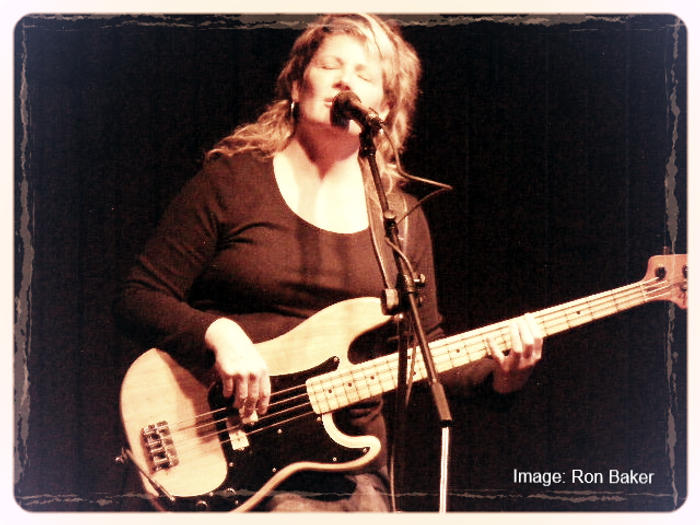 A well-known musician among musicians, Julieann Banks has worked professionally as a bassist and vocalist for popular Austin bands including The Austin Lounge Lizards, The Cosmic Americans (with Earl Poole Ball and Casper Rawls), and with notable performers like Leeann Atherton, Patterson Barrett and more.  She has toured nationally with show bands Rotel & the Hot Tomatoes and The Big Time, and performed with her own award-winning bands, Apaches of Paris and The Activates.

From MusicAustin.com:
"Julieann Banks’ alternative country musical stylings include songwriting, singing and guitar-playing in a blend of Texas Americana, folk, rock and country, with a streak of blues and gospel for good measure. The edgy, electric emotion of her songs and singing are probably what earns her awards such as Austin Music Magazine’s “Best Female Vocalist Rock,” one of the Top Ten in South by Southwest Austin Chronicle Music Awards’ “Best Songwriter,” and Austin’s Local Flavor Music Magazine’s “Best Pipes,” among many others."

Her new album is the next step in Julieann's career.

"I’d like to start playing more nationally, with an eye toward international touring to promote the new (album).  So many people have expressed interest in my new songs when I perform them, but I have no product to sell.  I want to let new and old fans know I’m still at it and I want them to hear my new works.

So much of what we hear and are exposed to (in) media, on television, and radio – is multi-track trickery.  It’s impersonal and digitally “created” and enhanced to the point where it has no human connection.

I’d like to return to an acoustic “warts and all” method of live recording, like the way Neil Young recordings sound.  Like the Cowboy Junkies recording where they are all gathered at certain distances around one, or very few, mics in a large church.  I’m very excited about staying true to a minimalist approach on this recording..."

How much does Julieann need to complete her project?

Julieann submitted a written request for $4000.00 to Works In Progress Louisiana for this project.  Our Board of Directors met with her, performed our due diligence, and approved her request for funding.

Artists, musicians, designers and writers can't visit the local bank to apply for a loan for a creative concept.  This can be a career-ending problem for creative professionals.

A recent article in The Times featured Julieann, and pointed out the many challenges faced by North Louisiana musicians - including finding funding for new projects, and sustaining a creative career in a region that doesn't understand that musicians are also serious businesspeople.

Now, thanks to Works In Progress Louisiana, YOU have the opportunity to engage with creative workers like Julieann at the onset of new projects - supporting work that is fresh and experimental in nature, and for which other funding is not available.

YOU can make a direct investment in a creative project, knowing it has been thoroughly vetted by a respected Board of Directors comprised of professional artists and businesspeople.

Posted by Debbie Hollis at 2:37 AM